Checking in from the Virtual Tour Bus 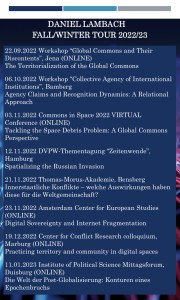 A few months ago I noticed that I had accumulated a series of speaking engagements, conference presentations and panel discussions. In what seems like the only logical response, I announced a Fall/Winter Tour. I have now passed the midpoint and since some people on Twitter (remember Twitter?) and LinkedIn expressed interest in one or the other of these talks (also tour shirts – still figuring those out), I want to use this post for direction how to find more info.

The Territorialization of the Global Commons

Tomorrow I’ll participate in a panel discussion on digital sovereignty and internet fragmentation. More on that and the other upcoming talks in due course.