What’s Behind the Rise of Internationalized Intrastate Conflicts?

I was at a training conference for Bundeswehr officers today. The overall topic was the future of NATO but my own talk was focused on civil wars and their implications for the international community. That meant I was revisiting a topic that I used to work on quite a bit up until about a decade ago. And, given how much the world has changed since then, it felt a little anachronistic. It’s still a relevant topic but the international agenda has clearly shifted away from it.

The Rise of Internationalized Intrastate Conflicts

Anyway, the occasion prompted me to look at some of the more recent data on conflicts and international intervention. One of the larger shifts was in the distribution of conflict types. The following figure from the Uppsala Conflict Data Program (UCDP) shows a rise of what UCDP calls „internationalized intrastate conflicts“ since about 2009. (By the way, UCDP makes all their data and lots of visualisations available for free.) „Internationalized“ civil wars are those where other states send troops in support of one conflict party. 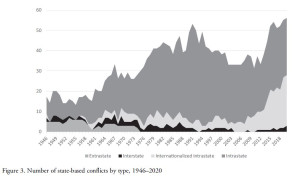 This was somewhat intriguing and prompted me and a colleague to speculate about the reasons behind this rapid increase in internationalized civil wars. Did this indicate a rise in international interventions, possibly even a hybridization of intrastate and interstate conflict? Not quite, as it turned out.

While I cannot explain the entire rise in numbers, the reasons behind it seem a little more prosaic than I first thought. Looking at the 25 cases in the 2021 dataset, several observations emerge:

So, all in all, the rising number of internationalized internal conflicts does not seem to herald a new age of globalized interventions. It might, however, suggest that interventionary practices are shifting a little bit. Where earlier interventions were more about peacebuilding between sides which – at least in theory – were seen as having legitimate political concerns, the current crop of interventions are mainly in cases where governments should be protected against radical Islamist insurgents. Having said that, I have some concerns about where UN Peacekeeping is headed at the moment, but that will have to wait for another time.