In preparing my talk for today’s Zeitenwende workshop, I decided to focus on an example to illustrate how a spatial approach can be used to bring together different theoretical perspectives on the same event. The war in Ukraine offers many such examples and I decided to use the 8 October 2022 attack on the Kerch Bridge.

This operation, in which two tracks of the road bridge were destroyed, making it inaccessible to lorries, deteriorated Russian logistics for the supply of its Southern flank. It was also symbolically important because the bridge – at 19km the longest in Europe – was touted as a major achievement by the Russian regime. As such, it featured heavily in official propaganda. Besides the official speeches, the postage stamp and other acts commemorating the bridge, one example truly stands out. 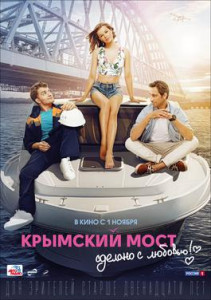 “The Crimean Bridge: Made with Love!” is a 2018 Russian state-funded movie. The script was written by Russia Today Editor-in-Chief Margarita Simonyan, one of the chief propagandists of the regime, and directed by her husband Tigran Keosayan. An editorial by Radio Free Europe likened the movie to Mamma Mia if it had been made by the Soviet Union.

I want to quote extensively from the movie’s Wikipedia entry because it is so bonkers. The plot is described as follows: “The Crimean Bridge is being built in Kerch, a city in eastern Crimea, during the summer. Two men at the construction site are pursuing an archeology student named Varya: Viktor, a PR man from Moscow who arrives in a white convertible with an American television crew, and Dima, a young and ambitious builder.”

Sadly, it doesn’t say how the movie ends! Will Varya choose the Americanized, slick big-city guy or the down-to-earth boy-next-door who is working hard on a patriotic project? The tension! Readers, please leave a comment if you know!

It goes on. The reception was… not great: “The film attracted scathing reviews, and was even the lowest-rated film on several film review aggregators. […] It flopped at the box office […]. Cinemas in Kazakhstan refused to screen this film, citing no interest from local movie-goers.” However, not everyone was unhappy – Simonyan made bank. According to claims by Russian opposition figure Alexey Navalny, Simonyan embezzled millions of Rubles in state funds through her production company. Isn’t propaganda magical?

Anyway, I have recorded my talk on „Spatializing the Russian Invasion“ and put it on my Youtube channel. Let me know what you think!