When I announced last week that I would delete my Twitter account shortly, I did it with the expectation that Twitter would – in the long run – devolve into an alt-right shadow of itself. Filled with FrEe SpEeCh advocates who are very concerned about their god-given right to shout racial slurs, literal neo-Nazis, as well as the remains of the more respectable and/or unpolitical Twitterati who haven’t noticed the change or don’t care about it. Basically, a Parler with a broader user base and an inherited veneer of respectability, however long it may last.

Well, I am the first to admit that early indications prove me wrong. Where I expected this process to take years, progress in a single week has been nothing short of momentous. There were the predictable spectacles of hate speech and right-wing figures opening new accounts. Large swathes of Twitter staff were fired using the most ridiculous of metrics – lines of code produced – including a lot of people who were responsible for moderation and ethics. And boy, if you had doubts about the ethics of Twitter before the takeover, let’s see how this baby can go! 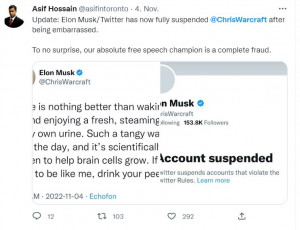 The man at the center of all this – Elon Musk, boy genius – proved his reputation as an agent of chaos right. Undercutting the (previously already sort of ridiculous) verification process and then publicly haggling about the price was a mistake. Spooking advertisers that his imminent unleashing of the forces of free speech would endanger their brands was another. Everything is rapidly descending into farce: first proudly boasting that comedy would be legal „again“ on Twitter and then throwing the most thin-skinned fit when users – liberated from  verification requirements – impersonated his account en masse, is further confirmation that Musk is not the smart, 4D chess-playing mastermind that his fans make him out to be. Instead, he craves adulation and makes decisions on a whim. Reports that Twitter is now trying to re-hire some of the engineering talent they fired barely a few days ago is further evidence of that.

The larger question is, why is Musk doing that? Why did he buy Twitter, a company that was never really profitable, in the first place? He may believe that he can turn Twitter around into a revenue-generating machine. He wouldn’t have leveraged himself so highly otherwise – if Twitter fails, then Tesla is also in a bad spot. It may also be that making the offer was merely an on-the-spot decision, a view that is supported by the lengths to which Musk went to avoid having to follow through on the purchase. And while I believe these two explanations to be probably true, I think there is also a third reason.

This third reason is political and it is why I believe that we need something that I facetiously call Critical Musk Studies. Sure, Musk and Celebrity CEOs of his kind have always been political actors of a kind. But recently – maybe across the year 2022 – Musk has developed a political profile within American party politics. Specifically, Musk seems happy to associate with the MAGA crowd. He is willing to amplify conspiracy beliefs about Democrats and has a buddy-buddy relationship with Donald Trump and more problematic figures like Peter Thiel. [EDIT: He has now explicitly called for his followers to vote Republican in the midterm elections. This is ridiculous, if not unexpected.]

And now he is in control of a social network that might not be a winning business proposition but that has become extraordinarily important for political communication. Decision-makers, journalists, CEOs, activists from across the globe – everyone is (or was) on Twitter and the things that were said there had real-world importance. That’s what Elon Musk wanted to get in on, maybe out of a genuine concern for free speech (although his „free speech absolutist“ credentials have taken a big hit by his mishandling of the impersonation epidemic) but also maybe to amplify the voices of his right-wing friends who have had a harder time on Twitter ever since Jack Dorsey left the place.

Anyway, I’ll be deleting my Twitter profile once the download of my archived tweets finishes. After that, I will spectate from the peanut gallery (Reddit, probably) to see whether present trends continue and how many other rakes Musk can step on. There is more to be said about what this presages for social media more generally but that is something for another time.